A story of botany, exploration and desire, spanning across much of the 19th century. The novel follows the fortunes of the brilliant Alma Whittaker (daughter of a bold and charismatic botanical explorer) as she comes into her own within the world of plants and science. As Alma’s careful studies of moss take her deeper into the mysteries of evolution, the man she loves draws her in the opposite direction—into the realm of the spiritual, the divine and the magical.

The Signature of All Things opens with Alma’s grandfather working as an orchardman at the ‘botanical Noah’s Ark’: Kew Gardens in Richmond, London. Elizabeth Gilbert spent time researching her novel at Kew, and has said that Alma’s character is based in part on the life of the pioneering artist and naturalist Marianne North (1830–1890). North’s botanical illustrations are displayed in a gallery dedicated to her at Kew, which showcases more than 900 species of plants.

Here, Christopher Mills (Head of Library, Art and Archives at Kew) tells us about one of the extraordinary women who served as an inspiration for Alma Whittaker.

It is not surprising that Marianne North was one of the inspirational women that helped shape The Signature of All Things. In her quiet way, both the lady herself and her legacy, which lives on through her art in the gallery that bears her name in Kew Gardens, has inspired many. When people walk into the gallery today, a “wow” or sharp intake of breath is the usual reaction of a first time visitor. This initial reaction matures into respect and wonderment as they learn of her life and, in particular, what she achieved in 15 years of travel that took in every continent, bar Antarctica.

Bucking the conventions of the mid-19th century, Marianne did what few women, born into a privileged life, would have dared think of doing: travelling the world alone and going not only to countries which rarely saw male European travellers, but to the remotest parts of these places. Inspired to undertake these travels by visits to Kew Gardens when a child, she longed to see the places where the exotics she saw in the Palm House and Temperate House grew in the wild. When finally she was able to realise this dream she painted the plants and landscapes she encountered everywhere she set foot, recording in this visual diary plants from the smallest mosses to the grandest trees and taking in every detail of the environment. 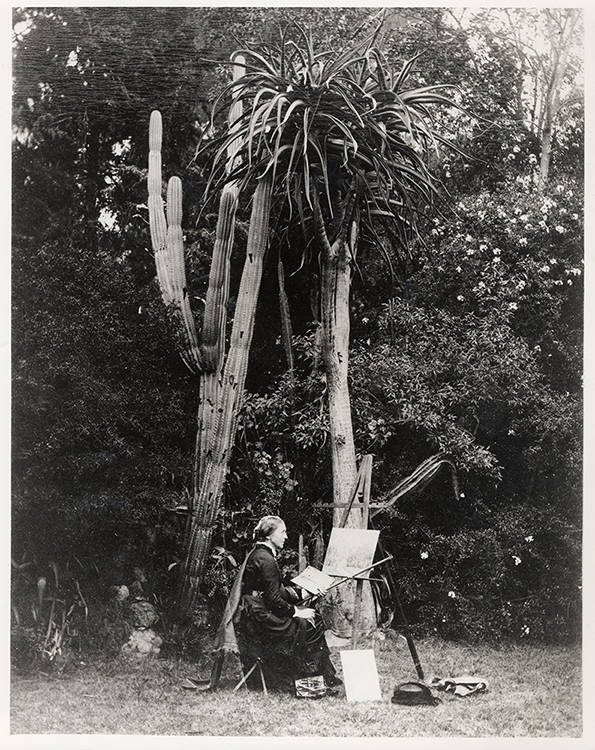 Having been encouraged to build a gallery and share her visual record of an already changing world with the many visitors to Kew, who would at that time mostly never travel far, she must have been thinking of putting her travels behind her when a family friend, Charles Darwin, observed that as she had not yet been to Australasia she had not yet seen the full spectrum of all the wonders that evolution had given rise to. She quickly corrected this omission and returned with a further 300 paintings.

In one way Marianne’s life differed markedly from that of the character she helped give rise to, as romance seems not to have played a key part in shaping her life; perhaps a reason there has never been a film on Miss North?Marianne’s life story and her paintings have had a profound effect on many though, encouraging them to take up a brush themselves, to travel, to botanise and to appreciate plants and the environment. Her life story, her paintings and writings will continue to inspire for many years to come.