Assembled from dozens of previously unused archival sources, Wounded is the first comprehensive account of medical care at the Western Front. We thought it would be interesting to consider Emily Mayhew’s book alongside an experience of war and the wounded from the present day, some 100 years later.

Through two of his diary extracts, below, David Cotterrell reflects on analogous events he observed of contemporary military medicine. Cotterrell is an installation artist and Professor of Fine Art at Sheffield Hallam University. Travelling as an observer, he witnessed the trauma-care undertaken in a tented military field hospital in Helmand province during an accelerated period of violence in late 2007. He had been sent with the support of Wellcome Collection with an agenda to explore the ethically challenging relationship between war and medicine.

“2 T1’s and a T4. I assume a T4 is a light injury. I am wrong –T4 means dead. I don’t know what to do. My problems of appropriate behaviour are insignificant compared to the enormity of the events taking place. I find myself feeling clumsy and self-conscious. I go to see the Regimental Sergeant-Major… He will coordinate the treatment and reception of the fallen soldier. He says he thinks I should be there and to speak to ColGolbourne [who says] “Yes, alright, but no photos please.” Almost out of habit, I nearly protest but pull myself together in time…

Wrapped in a clear plastic bag within an open dirty green body bag is the soldier. There’s enormous dignity offered to the dead man. The ambulance crew, assisted by two other soldiers, gently lift the stretcher from the ambulance and place it on to the trestle base. We bow our heads and the Padre… says a short prayer. I feel shaky as I gaze at the unkempt and skinny frame of the soldier. His clothes are soaking wet and hang clumsily from him. He has developed a wispy full beard of inch long red hair. He has a blue tint to his pale and dirty skin. He is from Inkerman. I can’t help but stare at [the soldier]. The doctor checks for signs of life. Pulse, light in the pupils, he uses my torch (and I am grateful to have a small purpose) and touches a cloth to the man’s cornea.

He is formally pronounced dead. The Royal Military Policeman steps forward with a camera and begins to purposefully and efficiently photograph the body from several angles. The kindly look on his face belies no acceptance of my presence and I still sense his distaste at having a voyeur in the room… I am beginning to realise that I may never lose the images viewed this morning.” 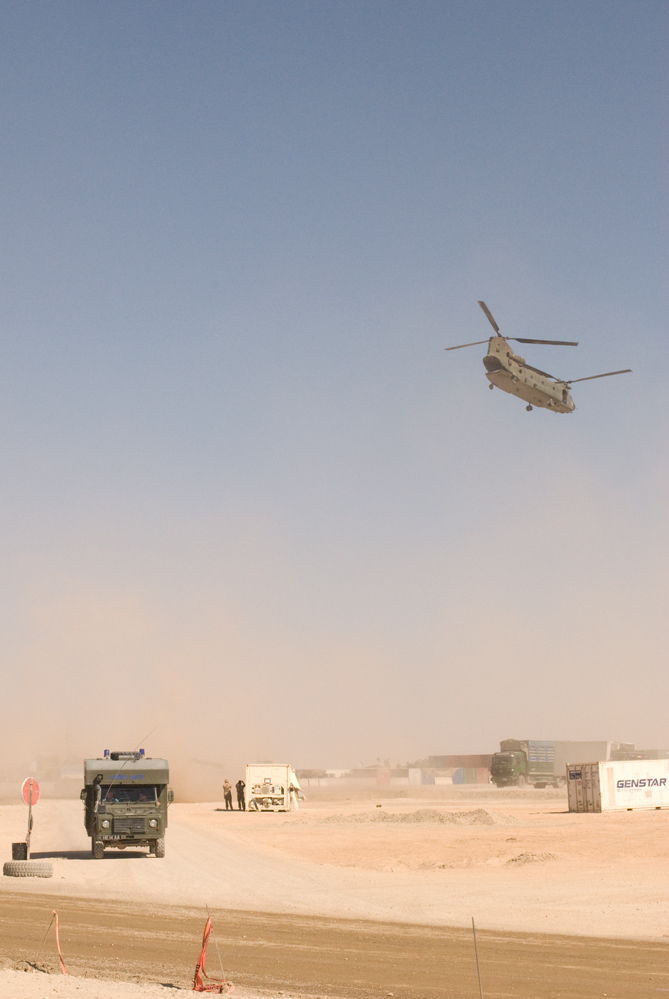 “The most obvious injury is to his foot. Bone and flesh hang from its centre. The heel protrudes about two inches from the base of his sole. The x-ray explains. There are no fragments of shrapnel; the force of the blast has travelled through the armoured vehicle into his foot and with devastating effect has forced the bones from the base of the foot upwards. The neat lattice of bone and tendon has been rotated and pushed away from his heel. The anesthetist is beginning his work. The soldier keeps shouting “Sir” as he deliriously looks around “Don’t take my legs” he appeals. “Have I got my legs?” He doesn’t believe the doctor who reassures him that the remains of both are still attached to him. I am wearing a heavy x-ray apron and find myself welling up. The activity seems further away and I find myself cold and sweating profusely. I struggle to stop myself fainting. I mustn’t faint.” 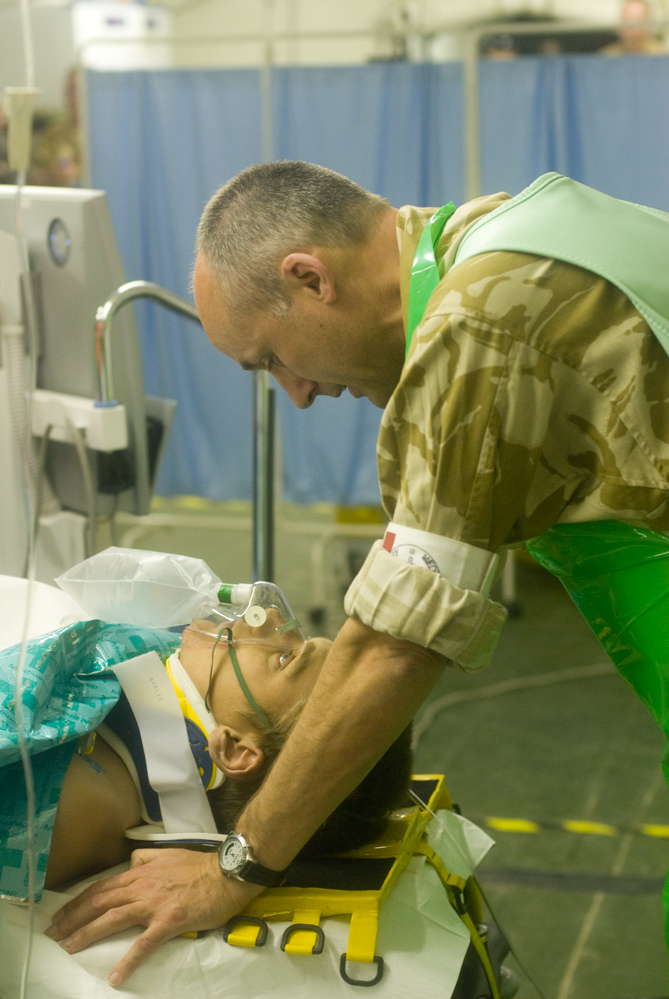 These diary extracts document a short, emotional journey through an unfamiliar context: from the RAF base, Brize Norton, to the Forward Operating Base, Sangin, from novelty to institutionalisation. They contrast my angst and self-conscious embarrassment with the absolute confidence of those I was observing—individuals who had little time to prevaricate or to hesitate.

Field hospitals are islands between contrasting environments: between the danger and dirt of the Forward Operating Bases and the order and convention of civilian healthcare. In the tented hospital of Bastion, dramatic episodes in individual narratives were being repeatedly enacted. Thanks to the initial lifesaving treatment at the point of wounding, the speed of extraction and the extraordinary skills of the doctors and nurses, most of the injured survived.

I arrived back in Britain feeling a great sense of anger. I was frustrated by my previous ignorance of the frequency of injury. Soldiers are surviving wounds that would often have been fatal in previous conflicts. In the media, we hear about the deaths, with only occasional reference to the wounded. I came home assuming the violence I had witnessed in Afghanistan would be the focus of the news. But less dramatic events occupied the headlines. For me, the incongruity between what I had seen and what was presented as the public face of conflict was, and continues to be, profound and irreconcilable. 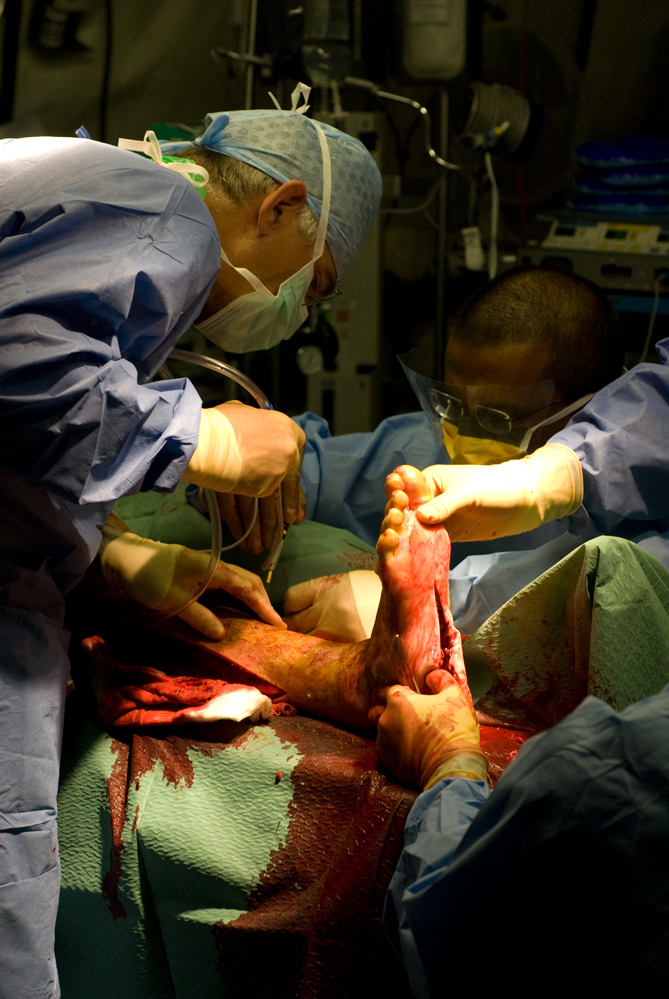